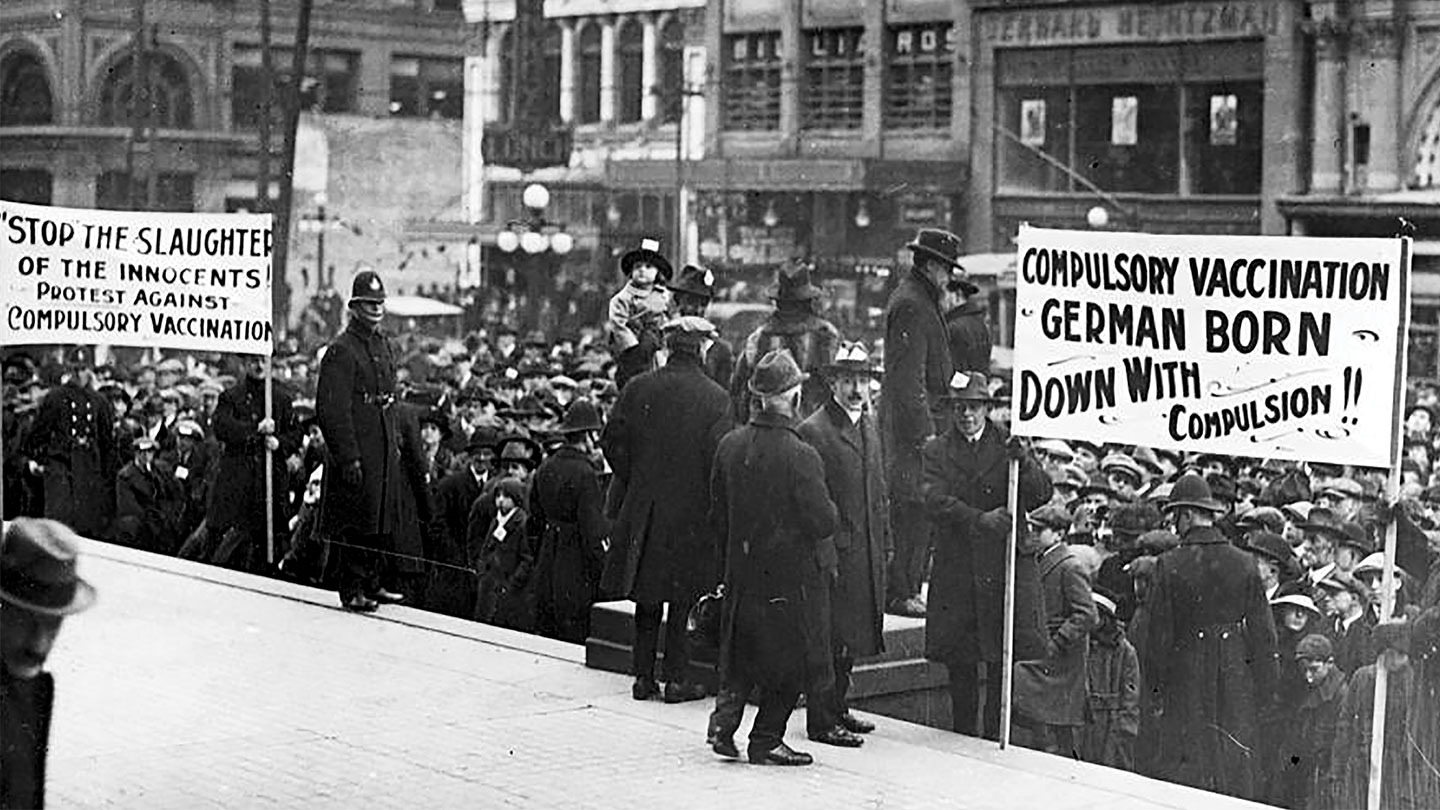 Vaccine hesitancy is nothing new. Here’s the damage it’s done over centuries


As vaccines to protect people from COVID-19 started becoming available in late 2020, the rhetoric of anti-vaccine groups intensified. Efforts to keep vaccines out of arms reinforce misinformation about the safety and effectiveness of the vaccines and spread disinformation — deliberately misleading people for political, ideological or other reasons.

Vaccines have been met with suspicion and hostility for as long as they have existed. Current opposition to COVID-19 vaccines is just the latest chapter in this long story. The primary driver of vaccine hesitancy throughout history has not been money, selfishness or ignorance.

“Vaccine hesitancy has less to do with misunderstanding the science and more to do with general mistrust of scientific institutions and government,” says Maya Goldenberg, a philosophy expert at the University of Guelph, Ontario, who studies the phenomenon. Historically, people harmed or oppressed by such institutions are the ones most likely to resist vaccines, adds Agnes Arnold-Forster, a medical historian at the University of Bristol in England.

A range of recurring and intersecting themes have fueled hesitancy globally and historically. These include anxiety about unnatural substances in the body, vaccines as government surveillance or weapons, and personal liberty violations. Other concerns relate to parental autonomy, faith-based objections, and worries about infertility, disability or disease. For example, some people oppose vaccines that were grown in cell culture lines that began from aborted fetal cells, or they mistakenly believe vaccines contain fetal cells. One of today’s false beliefs — that COVID-19 vaccines contain a microchip — represents anxiety about both vaccine ingredients and vaccines as a surveillance tool.

“The reasons people have hesitated reflect the cultural anxieties of their time and place,” Goldenberg says. People worried about toxins arising during environmentalism in the 1970s and people in countries steeped in civil war have perceived vaccines as government weapons.

Historical attempts to curb vaccine hesitancy often failed because they relied on authoritarian and coercive methods. “They were very blunt, very punitive and very ineffective,” Arnold-Forster says. “They had very little impact on actual vaccine intake.”

The most effective remedies center on building trust and open communication, with family doctors having the greatest influence on people’s decision to vaccinate. Increased use of “trusted messengers” to share accurate and reassuring vaccine information with their communities builds on this.

18th Century
Smallpox vaccine sets the stage around the globe

In a way, anti-vaccination attitudes predate vaccination itself. Public vaccination began after English physician Edward Jenner learned that milkmaids were protected from smallpox after exposure to cowpox, a related virus in cows. In 1796, Jenner scientifically legitimized the procedure of injecting people with cowpox, which he termed variolae vaccinae, to prevent smallpox. However, variolation — which staved off serious smallpox infections by triggering mild infection through exposure to material from an infected person — dates back to at least the 1000s in Asia, Africa and other parts of the world. In some cases people inhaled the dried scabs of smallpox lesions or rubbed or injected pus from smallpox lesions into a healthy person’s scratched skin.

About 1 to 2 percent of people — including a son of Britain’s King George III in 1783 — died from the procedure, far fewer than the up to 30 percent who died from smallpox. Benjamin Franklin rejected variolation, but later regretted it when smallpox killed his youngest son. Onesimus, an enslaved man in Boston, taught the procedure to Puritan minister Cotton Mather, who in turn urged doctors to inoculate the public during a 1721 smallpox outbreak. Many refused, and Mather faced hostility: A small bomb was thrown through his window. Reasons given for avoiding variolation — particularly that it was unnatural to interfere with a person’s relationship with God — were the seeds of later anti-vaccination attitudes.

In 1809, Massachusetts passed the world’s first known mandatory vaccination law, requiring the general population to receive the smallpox vaccine. Resistance began to grow as other states passed similar laws. Then the U.K. Vaccination Act of 1853 required parents to get infants vaccinated by 3 months old, or face fines or imprisonment. The law sparked violent riots and the formation of the Anti-Vaccination League of London. Vaccine resisters were often poor people suspicious of a forced medical intervention since, under normal circumstances, they rarely received any health care. Anti-vaccination groups argued that compulsory vaccination violated personal liberty, writing that the acts “trample upon the right of parents to protect their children from disease” and “invaded liberty by rendering good health a crime.”

Anti-vaccination sentiment grew and spread across Europe until an 1885 demonstration of about 100,000 people in Leicester, England, prompted the British monarchy to appoint a commission to study the issue. The resulting 1896 report led to an 1898 act that removed penalties for parents who didn’t believe vaccination was safe or effective. The act introduced the term “conscientious objectors,” which later became more commonly associated with those who refuse military service on religious or moral grounds.

Across the Atlantic, most U.S. residents had embraced Jenner’s cowpox protective, leading to a precipitous drop in smallpox outbreaks. But with fewer outbreaks, complacency set in and vaccination rates dropped. As smallpox outbreaks resurfaced in the 1870s, states began enforcing existing vaccination laws or passing new ones. British anti-vaccinationist William Tebb visited New York in 1879, which led to the founding of the Anti-Vaccination Society of America. The group’s tactics will sound familiar: pamphlets, court battles and arguments in state legislatures that led to the repeal of mandatory vaccination laws in seven states. The 1905 Supreme Court decision Jacobson v. Massachusetts upheld a state’s right to mandate vaccines; it remains precedent today.

20th Century
A menu of vaccines draws praise and ire

The U.S. entered a golden age of vaccine development from the 1920s through the 1970s with the arrival of vaccines for diphtheria, pertussis, polio, measles, mumps and rubella. Opposition diminished as infection rates, particularly for polio, fell. Rosalynn Carter and Betty Bumpers, the wives of the governors of Georgia and Arkansas, respectively, began a vaccination campaign that grew into a national effort in the 1970s. The goal was to encourage every state to require children attending public school to receive most vaccines recommended by the U.S. Centers for Disease Control and Prevention.

A nationally aired 1982 news documentary called “DPT: Vaccine Roulette” changed everything. Lea Thompson, a reporter with WRC-TV in Washington, D.C., shared emotional stories of parents claiming their children had suffered seizures and brain damage from the diphtheria-pertussis-tetanus, or DPT, shot. Interviews with doctors lent the stories credence. Fever-caused seizures were a known side effect of DPT, and a 1974 study had reported neurological complications developing in 36 children within 24 hours of DPT vaccination. But the study did not follow the children long-term. Later research revealed neither the seizures nor the vaccine caused long-term brain damage.

But the damage to public trust was done. Coopting the DPT acronym, one parent, Barbara Loe Fisher, cofounded Dissatisfied Parents Together, which became the National Vaccine Information Center, the most influential anti-vaccine organization in the United States.

The National Vaccine Information Center maintained a steady hum of anti-vaccination sentiment and activity through the 1980s and ’90s. Then British gastroenterologist Andrew Wakefield published a report in the Lancet alleging that the measles-mumps-rubella, or MMR, vaccine caused autism spectrum disorder in 12 children. Wakefield falsified data, violated informed consent and secretly invested in development of a solo measles vaccine, but it took years to uncover his deceit (SN Online: 2/3/10). Fears about autism and vaccines had already exploded by the time the study was retracted 12 years after publication.

Almost immediately after publication of the study, U.K. vaccination rates began falling. But news of Wakefield’s work didn’t reach the United States until 2000, just as U.S. medical authorities were embroiled in a debate about the use of thimerosal, a mercury-containing preservative, in vaccines. In 1999, the U.S. Public Health Service recommended removing thimerosal from childhood vaccines as a precautionary measure to reduce infants’ mercury exposure. Later research showed no safety concerns about its use.

The MMR vaccine never contained thimerosal, but fears about mercury-related brain damage merged with those about MMR and autism, creating a storm of anger and fear surrounding claims of vaccine harm.

Despite the 2010 retraction of his study and the revocation of his license to practice medicine in the United Kingdom, Wakefield remains a leader in today’s anti-vaccination movement. Joining him is Robert F. Kennedy, Jr., who gained prominence promoting unfounded allegations about thimerosal. Both men rode the wave of anti-vaccination networking on social media and the promotion of disinformation through slick documentaries like 2016’s Vaxxed: From Cover-Up to Catastrophe (SN Online: 4/1/16).

In 2014, the United States saw its highest number of measles cases since the disease was eliminated from the country in 2000, culminating in a large outbreak that began at Disneyland that December. In response, California passed a law removing parents’ ability to opt out of vaccinating their children based on personal beliefs and required that all children receive CDC-recommended vaccines to attend school (SN Online: 7/2/19). Extreme opposition to that law and subsequent ones helped fuel a resurgence in anti-vaccine advocacy along with an alarming measles outbreak in 2019 (SN: 12/21/19 & 1/4/20, p. 24).

The vast majority of people accept recommended vaccines and their role in stemming the spread of infectious diseases. Recent surveys suggest that 69 percent of U.S. adults say they have or will get a COVID-19 vaccine, an improvement over the 60 percent willing to do so in November. But responses to surveys don’t necessarily predict behavior, Goldenberg says.